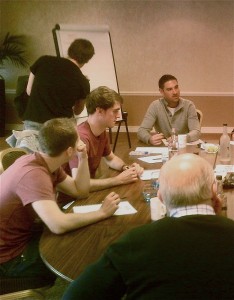 Think Funny host lively comedy writing courses for people who are serious about writing and performing comedy. Our tutors earn their living in the comedy business. Tutor Brian Luff has created a comedy series for Channel 4 and MTV, edited the BBC comedy web site, and has appeared in hundreds of comedy shows on the Edinburgh Fringe.

Brian offers sound, hands-on advice based on many years working in the industry. Our comedy writing courses are recommended by the British Society of Comedy Writers and have featured in documentaries on BBC3 and ITV1.

Former student James Pavey says, “Genuinely one of the best things I’ve ever done. I will remember the experience for the rest of my life.” Recent feedback from former student Cameron Bell: “Just back from only my second gig, The Massive Comedy Gong Show at The Shack in Edinburgh, which I WON! I would never have done it without the sessions with Think Funny!”

Former student Tom Davis now stars in BBC comedy series Murder in Successville. Other former students include Nick Helm and Imran Yusuf who have both been nominated for the Edinburgh Comedy Award (whose previous winners include Russell Kane, Al Murray and Steve Coogan.) Jannie Jack and Bruce Fumey now run their own comedy clubs.  If you’re serious about getting into comedy, our comedy writing courses are the best in the business!  Book now