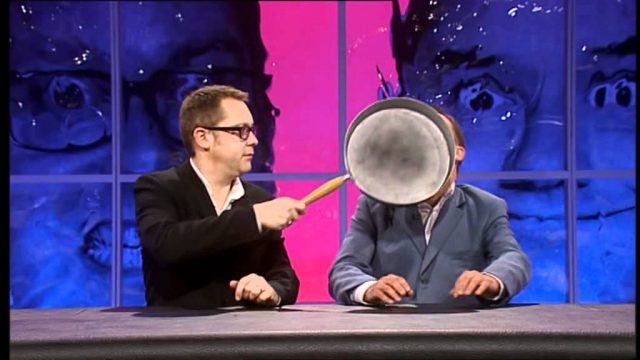 Brian Luff writes… One of the first things we find funny when we’re very young is pain. If our friend falls over in the playground we laugh. Not because we don’t like our friend, but because it wasn’t us that fell over. Laughter in that situation is an expression of relief. It’s what the German language so delightfully calls schadenfreude.

That’s the category of comedy we nowadays call slapstick. A kick in the arse. A pie in the face. There was even a comedy stage show in 1976 called A Poke in the Eye with a Sharp Stick – a title which seems to somehow be paying tribute to the fact that pain can be a funny thing.

The poke in the eye was a trademark move for Basil Fawlty, played by John Cleese. His nasty, physical attacks on the hapless Manuel were very much part of the formula of Fawlty Towers, and some of them are now quite difficult to watch.

In fact, we’re told that Andrew Sachs, who played Manuel, would often complain that Cleese used to hit him just a little bit too hard during filming. That extra bit of adrenalin that kicks in during a take can often make actors punch a little too hard, and there are many examples of actors being knocked out by what was supposed to be a stage punch. My former writing partner Andrew once worked with Mr Blobby, and said that his gentle run-throughs during rehearsal, quickly became quite violent shoves and punches as soon as the red light went on.

The most-shown BBC comedy clip of all time is the one where Del Boy Trotter, from Only Fools and Horses, inadvertently falls behind the counter of a bar. At one time the clip was shown so many times that the original video tape started to wear out. The Beeb had to make what they called a “protection copy”.

One of the things that made this scene so funny is that actor David Jason falls out of shot – so we don’t actually him land. This is definitely “best practice” for comedy falls on screen. The audience are much more likely to laugh if they don’t see the landing. This is probably because our brains imagine something even more painful than the actual impact.

You might be interested to know that because the actor playing the barman had to exit from behind the counter just before that fall happened, it was necessary to position a mattress in Jason’s landing area just seconds before he hit the floor. I know that because a friend of mine, Adrian Pegg, happened to be the floor manager on that episode, and it was his job to slide the mattress under Jason.

Miranda Hart, in her sitcom Miranda, is a great exponent of the fall out of shot. Next time you watch this show, check it out. Hart usually falls over while walking towards the camera, and she drops directly downwards out of frame. So, we only hear the thud on the floor, and our brains fill in the rest. In the days of Vaudeville, this type of stunt was referred to as a “pratfall”.

On film, the pratfall was initially made famous by Charlie Chaplin, who was probably kicked, shoved, pushed and tripped more times than any other performer in history.

It’s now a long tradition of comedy that has been passed down through the ages via Norman Wisdom, Lee Evans, and in numerous TV sitcoms like The Young Ones and Bottom.

If you watch Shooting Stars or Vic Reeves’ Big Night Out you’ll see just how much craft and skill goes into smashing someone around the head with a frying pan. Reeves and Mortimer have turned this piece of stage “business” into an artform, and it’s an important part of their brand.

As TV viewers, I think part of us is permanently addicted to pain. That’s why we like all those blooper shows. We love to see actors in distress as they forget their lines or trip over the furniture. And pain is definitely the main reason most people watch X Factor or Britain’s Got Talent. It’s not for sharing the joy of the winners, it’s for seeing the pain on the faces of the losers. We sit and eat our pizzas on a Saturday night and revel in the sight of people’s hopes and dreams crushed into dust by Simon Cowell.

In all of the above examples, the pain happens on the screen. It’s the performers that feel the pain and our laughs come from schadenfreude.

But there’s another kind of pain we can use in comedy, and it is a lot more subtle.  It’s a pain we experience when we can see that the person on the screen is actually feeling no pain themselves. We are left to feel their pain for them, within ourselves. This is “cringe” comedy. The pain of embarrassment. The pain that makes us experience all the discomfort ourselves.

David Brent feels no pain. He is not self-aware. So when he performs his famous little arm-swinging dance at the office party we die a million deaths for him.

Many people cannot watch the BBC sitcom The Office. They simply find it too painful to bear. During my writing workshops it has always been a show that splits the room right down the middle. You either love it, or you hate it.

Almost as painful to watch is the series I’m Alan Partridge. Steve Coogan’s performance as a failed TV chat show host, forced to live in a budget motel, explores the day to day life of a man with huge self-confidence, but without the self-awareness to see what a complete dick he is. In his every interaction he embarrasses and infuriates the people around him, while in his own mind thinking that he is cool, confident and articulate.

This type of pain is a lot harder to pull off than the type of physical pain we see in The Young Ones. It requires a great deal of subtlety in the writing and acting skills of the highest order.

To read the rest of this piece, get Brian Luff’s book The Serious Business of Writing, Performing & Selling Comedy