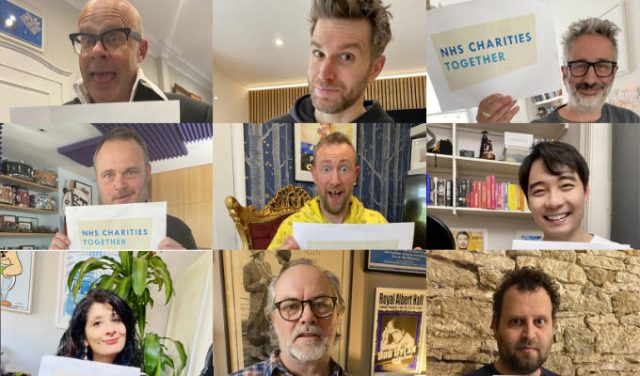 Thirty comedians including Harry Hill, Jack Dee and Miranda Hart, have recorded a charity single for the NHS.

Can’t Wait! celebrates the return to normal after lockdown and will raise money for NHS Charities Together.

It was the brainchild of doctor-turned-comic Simon Brodkin, best known for his headline-grabbing pranks, who sai: ‘Six months ago, in the midst of a lockdown, with all live comedy having ground to a halt and my tour postponed for a third time, I had a fun idea: what if a bunch of stand-up comedians got together over Zoom and recorded a song for the NHS.

‘Partly inspired by Captain Tom, partly motivated by guilt (I was a doctor before I became a comedian and left the NHS years ago) and partly because taking on a big project would be a great way of getting out of homeschooling my kids, I reached out to the very funny musical comedians Huge Davies and Bennet Kavanagh and together we wrote Can’t Wait! – a fun, silly celebration of everything we were missing about normal life.’

He recruited several comics with links to the NHS, including fellow ex-doctors Hill and Adam Kay, former nurse Jo Brand, and several with family connections:  Stephen K Amos’s mum was a nurse, Tim Vine’s mum was a GP receptionist and Nabil Abdulrashid’s dad was a doctor Read more

GET THE SINGLE | DONATE