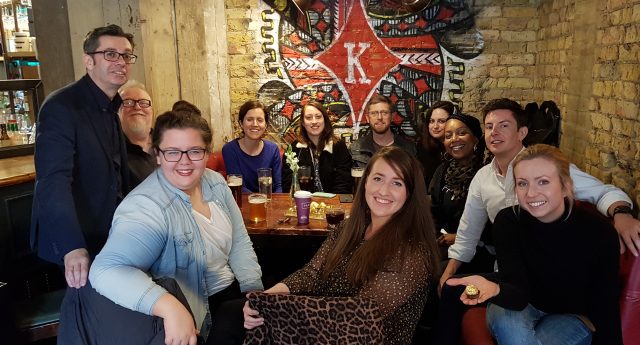 “I attended your writing workshop and recently co-wrote BBC1 sitcom Peter Kay’s Car Share. I got loads of useful tips, tools and motivation from your workshops.” Tim Reid.

Hosted at the world-famous Downstairs at the Kings Head comedy club in London, Brian Luff’s acclaimed comedy writing courses set out a number of successful formulae and powerful tools for writing comedy, passing on numerous techniques that Brian has developed writing for fringe, television, radio and digital. Learn how the pros use repetition, callback, reversal and other tricks of the trade to make the audience laugh. No previous experience necessary.

Participants work together to brainstorm and script comedy routines and sketches. There will also be some time spent looking at scriptwriting for stand-up and the structure of sitcom. You’ll learn about agents, commissioning editors and development producers and get some invaluable tips on how to get your scripts onto their desks.

These courses are great fun. Brian doesn’t just teach theory – he passes on tried and tested skills and offers sound, hands-on advice based on many years working in the industry. Think Funny workshops are recommended by the British Society of Comedy Writers and have featured in documentaries on BBC3 and ITV1. If you’re serious about writing comedy this is one of the best online courses in the business.