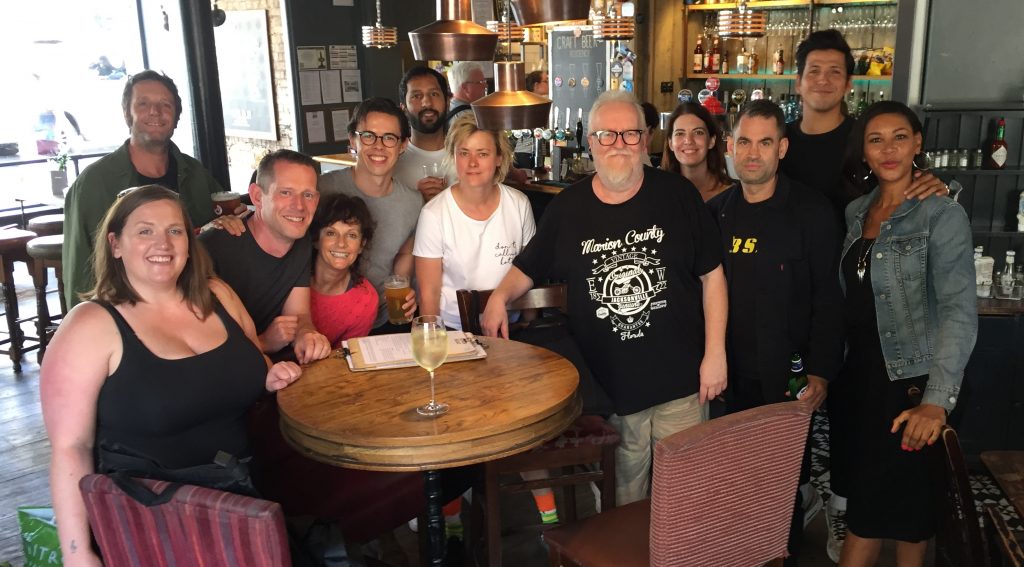 We’re excited to announce that Think Funny’s acclaimed comedy writing course is back at the famous Downstairs at the Kings Head comedy club in North London.

A former Think Funny student writes: “I just wanted to thank you for the brilliant course over the past six weeks.  I’ve done a couple of similar ones over the years but yours was on another level. Your approach to the mechanics of it all made so much sense to the group. It all clicked with me in a way that it hasn’t before and that’s down to the way you explain things, the years of first-hand experience you’ve had and the fact that you made it all so much fun. Thank you so much.” Carl Wheatley, 27 March 2021

BBC writer Tim Reid says: “I attended your comedy writing course and soon afterwards I co-wrote the BBC One sitcom Peter Kay’s Car Share. I’m working on a couple of new sitcoms now and wanted to get in touch to say thanks – I got loads of useful tips, tools and motivation from your workshop.”

Want to follow in Tim’s footsteps? Brian Luff’s acclaimed courses set out a number of successful formulae and powerful tools for writing comedy, passing on numerous techniques that Brian has developed writing for fringe, television, radio and digital. While looking at the disciplines of sketch writing, sitcom and stand-up, attendees learn how the pros use repetition, callback, reversal and other tricks of the trade to make the audience laugh. No previous experience necessary.

Attendees work together to brainstorm and script short comedy routines and sketches. Time is also spent looking at scriptwriting for stand-up and the structure of sitcom. You’ll learn about agents, commissioning editors and development producers and get some invaluable tips on how to get your scripts onto their desks. If you’re serious about writing comedy, this is the best course in the business Book Now

Think Funny workshops have been recommended by the British Society of Comedy Writers and have featured in television documentaries on BBC and ITV. Your tutor Brian Luff has written for sketch shows on ITV and Channel 5 and co-created a cult late night comedy series for Channel 4 and MTV. He has worked as a senior producer and talent scout for the BBC’s online comedy unit and as series producer for the TV series Cosmic Comedy. Brian has also worked on over 500 comedy shows on the London and Edinburgh Fringe.

On completion of this course you will be eligible to sign up for one of our advanced courses where you’ll get the chance to co-write, rehearse and perform in a 55 minute sketch show in front of an invited audience.

To book a place securely online using PayPal, please select dates from the dropdown box below. You’ll be sent an acknowledgement and full details by email.